My Oldest son has been in Karate for the past 3 years and has been accumulating Karate belts.  I have put them aside and tried to come up with something to present them and show all his hard work. 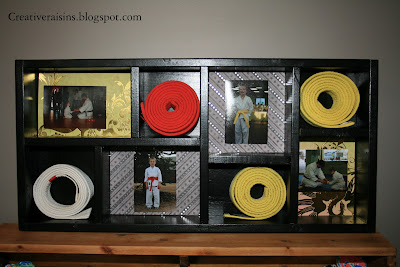 I wanted to incorporate his belts along with pictures of him throughout the years at his belt ceremonies.  I started with a simple box and then added in the cubbie and finished it off with backing the photo boxes with scrapbook paper and the pictures.
Posted by Creative Raisins at 22:25

Who knew karate belts could be decorative?! Great job!

That is a great way to incorporate the karate belts!

That is a beautiful way to display them! Thanks for linking this to Thrifty Thursday!

That's a really great idea! I wish I would have seen it before I threw out all of my daughter's old belts. Oops... We did keep all her black belts, so I might still be able to copy your idea. If you don't mind...

So cute! My son has tons of belts and I have been wanting to get a belt rack but heck, I can build one so why not. I actually never thought to do so before now lol. Please stop by and share this at my VIP party today... http://designergarden.blogspot.com/2011/08/vip-party-24.html

my girls once did karate - but alas no longer!
this is a fantastic idea - absolultey brilliant.
love your thinking!!
have a great weekend.
cheryl xox.

This is great! I really like the pictures along with belts, makes it so much more personal. I just made a belt rack for my daughters belts-she's up to her brown now. I wish I had seen yours first. :)

AWW! Wow to cute :) Please stop by to see my giveaway! There are 11 different prizes and for every entry I will donate 50 cents to the winners chosen charity! I am your newest follower :)

This is incredible! I truly like the photos alongside belts, makes it quite a lot more individual.Karate Belt Display UK I simply influenced a belt to rack for my little girls belts-she's dependent upon her dark colored at this point. I wish I had seen yours first.