This was another one of those "Honey I have an idea" moments.  I wanted to build something that would house my ugly plastic planters so I could have them on the deck.  I came up with this design using some 1x4's, 2x2's  and some leftover cedar planks. 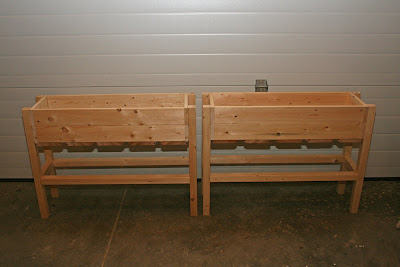 I am by no means a builder but I thought I would give it a try.  My first task was to build the box and then come up with the rest of it later, I figured if I had something to put it in the rest would come to me later lol.  Once this was done I had to come up with an idea of how the legs would work and how to make this sturdy enough to not tip over. I painted them with a nice bright blue and then gave them a white wash paint effect. 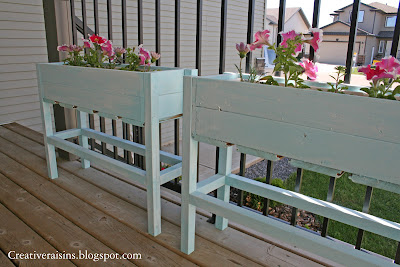 They are so pretty! I love the color...and pretty flowers always make me smile!

Great idea! Love how they raise the flowers off the 'floor'. Visiting from Take-A-Look Tuesday.
~ Kimberlee at The Spunky Diva

They are very cute!

Aww, those are sweet!

So simple but so pretty! I love the color you used, it looks very fresh and natural

These are really cute! Love the blue. You did a great job. I am your newest follower. Hope you can visit me sometime soon.

Very clever of you! Impressed that you just came up with the design as you went along. The result is gorgeous.

Love this idea and would love to feature it next week! Thanks for linking to Thrifty Thursday! :)

cute planters,, dont ya just love it when our ideas actually work.

This planter box is so pretty and looks like something I could do. Thanks for the inspiration.

Kate at Dream To Life said...

These are great! Love the color and shape!