Another Birthday party has come and gone and my little man had a great day.  This year we decided to have his party at our local Karate studio where both of my boys attend and the kids had a blast.

As I posted earlier we started off the event with these Karate inviations. 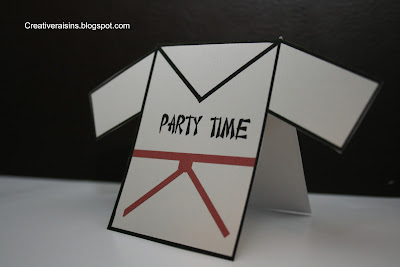 For me when decorating a party it is all about the details.  I love coming up with a different idea for the favor bags, something the kids can use.  This year I decided on doing up some t-shirts with a Karate guy on them and their names. 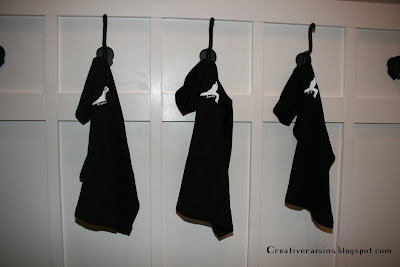 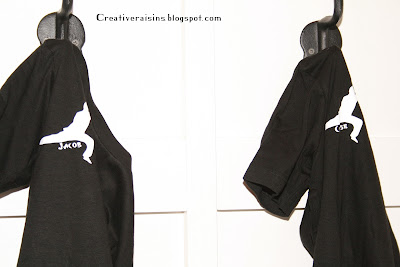 Then sticking with the theme I put them along with a few candies into these take-out boxes. 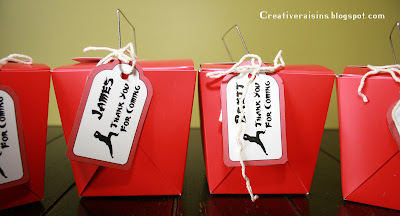 Of course my favorite part is the cake.  I had big plans for this cake and then reality set in and I realized that what I wanted just wasn't going to happen.  Really reality was my 3D figure falling apart three times and me throwing them in the garbage, lol.

So I kept it a little more simple. 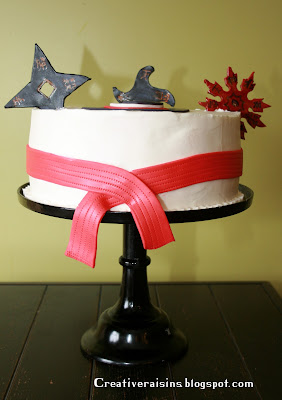 I used a white buttercream icing as my base and then used red fondant to make the belt.  My son is a Red belt so wanted it to be the same color. 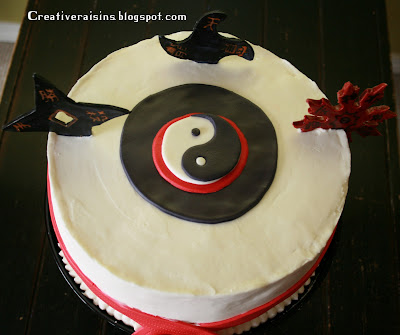 I used fondant to create the ying yang symbol on the top. 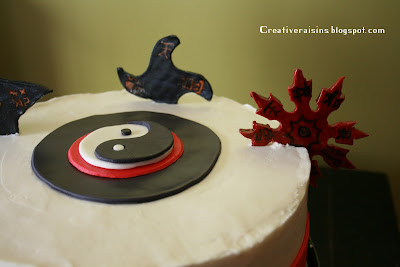 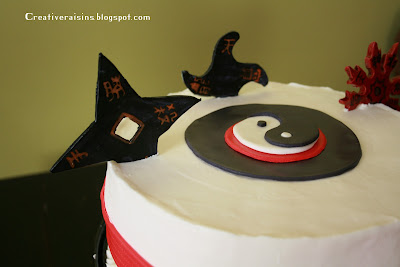 For the Shurikens I borrowed my sons real ones to trace out the gum paste with and then copied the symbols off of them.  Once they were all dried I pressed them into the cake to make them look like they were thrown at it. 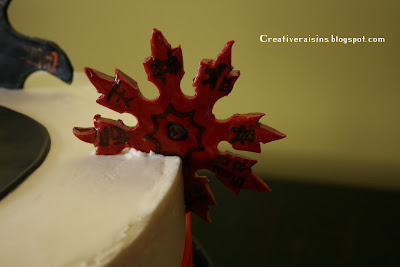 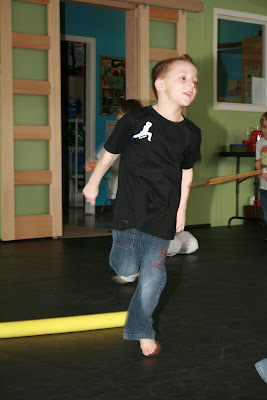 Here is my little man doing some Karate games and wearing his new shirt.

Another party down and another one on it's way in two weeks.  I had better get going on planning the next one. 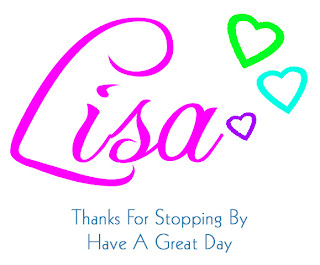 Posted by Creative Raisins at 17:51

Oh my goodness!! I love this party so much! The cake...oh, the cake! YOu are so very talented, my little Bryce would love this party....great job momma!

Wow - I'm speechless! Both of my kids used to take Tae Kwon Do, and this would have been a wonderful addition to my daughter's black belt ceremony. Simply FANTASTIC!

Looks so fun! Love the t-shirts and the cake looks so good!

What a great idea! My son would love this. I'm a new follower. If you have a minute, please stop by my brand new blog. I'd love to have you follow me, too:) Thanks so much!

Great theme and what awesome decorations to go with it! I bet your little man had a great birthday.

Wow! that cake is amazing! I know he loved the whole party!! thank you for sharing at our Uncommonly Yours party! Bonnie ;)

How to Nest for Less said...

Umm... this is just ADORABLE!! Love the takeout box idea :) THanks for linking up this week!

This is such a fun party theme! I love the takeout boxes and the cake looks like so much fun! Great idea to use shirts as party favors! Thanks for linking up to the Stache Party! I am featuring this today!

Awesome party idea! Love the cake. My son would love this!

Thanks for linking up @ Creatively Living!
--Katie

What a cute party idea!! I love it! Thanks for sharing at Thursday's Temptation.
Jill

You must be the coolest mom in his class...Love the cake, you did an awesome job!

Four Marrs and One Venus said...

I am loving your CAKE idea! Super Cute! My son is testing for his Black Belt in November I am so excited to have this cute idea for a cake of celebration! Thank you! Coming to you from Tip Junkie!!

What a lifesaver to run across blogs like this that detail birthday parties. I love your Karate themed party and especially the shirts as the kids "gift for coming". I would like to know more details on how you applied the karate guy and the name on the shirts as I'd like to recreate this for my son's 11th Taekwondo themed party on March 30th (and though I have no clue where to start, I follow directions very well!). Thanks so much for any advice and direction you can offer!